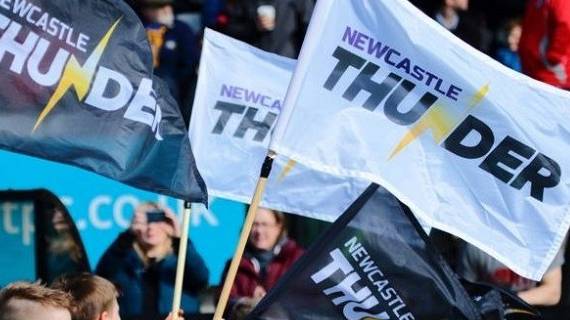 Newcastle Thunder were unable to capitalise on a superb start against London Broncos in the Betfred Championship on Sunday afternoon, as the full-time, former Super League club turned on the style to take a commanding 50-30 win.

It was a tough day on the pitch for Eamon O’Carroll’s side who put in a gallant display but were unable to make the most of all of their opportunities and who came across a side inspired by their mercurial half-back Jarrod Sammut, returning to the north east empty handed.

Thunder were quick out of the blocks and made the better start to the game, opening the scoring after just three minutes as they pounced on a mistake from Broncos fullback Oliver Leyland.

Playing at a kick through from Thunder’s Josh Woods, the ball was spilled forward into the path of Kieran Gill who gathered up and scored for the opening points of the day.

An almost instant response by the Broncos after a well-judged 40/20 kick give an early inkling into the high scoring match that was to come, but Thunder were looking good in attack and a cynical charge on a player without the ball prevented Thunder the chance to work a second try as Newcastle looked to hit back.

With the hosts reduced to 12-men for ten minutes, the Tynesiders made the most of their numerical advantage and surged into a 12-point lead with tries from on-loan Warrington centre Connor Wrench and club stalwart Evan Simons.

Wrench marked his debut for the club with a well taken try as he cut back inside after the ball was worked out wide to his edge, opening up a gap for himself as London’s drift continued over to create the hole.

From a new face to one of club’s longest serving, Simons was played in by a perfectly timed pass from captain Bob Beswick as Thunder worked the ball from side to side and put themselves in a good position with just a quarter of the match gone

London though remained composed and after pinning Newcastle back in their own half, were able to work two quick-fire tries at the end of the half to square the scores heading into half time.

The Broncos took the lead for the first time four minutes into the second half as Sammut’s cut-out pass found Gideon Boafo and they were able to keep the pressure on as mistakes and penalties undid good work that the visitors were putting in.

Another converted try and penalty put Thunder 14-points down but there remained nearly a quarter of the match to go and when Nathan Wilde barged his way over for a short-range try on 65 mins there was still an opportunity for Thunder to take.

Starting his sixth consecutive game, Wilde was busy throughout and it was one of the strong carries that have been a hallmark of his game so far, that got him over the whitewash for the first time in Thunder colours.

It was a short-lived in road to the Broncos lead however and they hit back just three minutes later as a Sammut break was finished by a supporting Greg Richards who had an unopposed route to the line.

Laying that try on for a team mate Sammut worked one of his own with five minutes to go, as he gathered his own chip around the defensive line to make sure of the result, however Thunder remained determined in their tasks and looked to have taken the final word with three minutes to play.

Making a powerful break through the middle, Connor Bailey passed out to Sam Wilde who deftly shipped the ball on to Gill for his second of the game and seventh for the season.

The ambition to finish on the front foot however allowed London to get up to the half-century mark as a spilt ball in the final moments fell straight into the hands of Abbas Miski, who streaked away to ensure the Broncos took their second win of the season.

Thunder now prepare to face Bradford Bulls on the road on Monday 17th May, as rugby league prepares to welcome fans back into its stadiums for the first time since March 2020