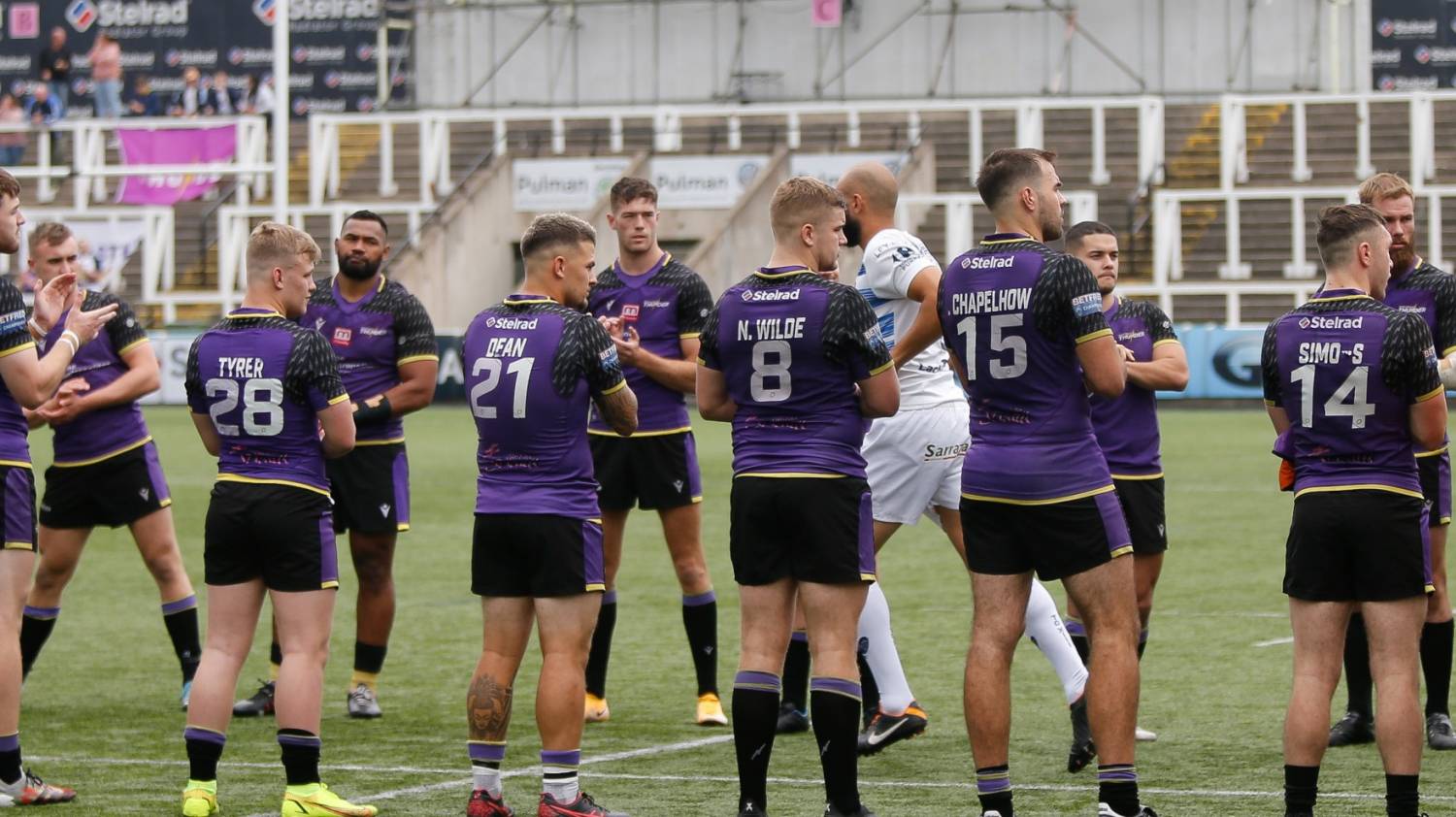 With Newcastle Thunder continuing to prepare for the start of pre-season training in November, the club have today confirmed those players who are leaving following the 2021 Betfred Championship season.

A total of 13 players will bid farewell to Kingston Park Stadium as the club rebuild ahead of returning to a full-time training environment for the 2022 campaign.

With club stalwarts, academy graduates and international stars among the group leaving for pastures new, director of rugby Denis Betts was fulsome in his praise and thanks of those departing.

Betts said: “After securing our place as part of Betfred Championship rugby for 2022 and moving to a full-time training environment we have an exciting year ahead of us, with details of new signings and re-signings to announce in coming weeks.

"We also have a number of departures as several players move on to new challenges. They have all played an important part in the journey of the club and ensuring we continue to progress, in line with our vision to ultimately win the Betfred Super League.

“I’d like to thank each and everyone of those players who are moving on to new challenges and hope that they will continue to be part of our wider Thunder family and of the club’s ongoing story.

“All of the players leaving have contributed to the successes we have so far enjoyed and have laid firm foundations for us to build on for the future. Thanks to you all.”

Former Ireland captain Bob Beswick joined ahead of the 2020 season from Toronto Wolfpack and in doing so, became one of the most experienced players ever to don a Thunder shirt.

Bringing more the 400 games worth of experience at club and international level with him, Beswick was appointed club captain upon joining.

Retaining that leadership role in 2021, Beswick was a key figure as the club made its return to Championship level rugby league for the first time since 2009.

A product of the club’s academy system, Clegg made his first team debut in the record 98-8 win over West Wales Raiders at the end of the 2018 season.

Initially released by the club, he earned a first team contract for the 2019 season and became a key figure as Thunder went all the way to the promotion play off finals, contributing 19 tries in 25 appearances.

He brought up his 50th first team game in the away win against Oldham in September 2021, with his final try in Thunder colours for now coming the week before at home to York City Knights.

Half-back Reece Dean joined Thunder in the 2019 off season, arriving from Hunslet as the club looked to establish a new half-back axis.

Starring for the club in the games prior to the Covid enforced cancellation of the season, arguably his most impressive performance came in his first outing.

Bossing appalling conditions, Dean was instrumental in Thunder securing a Challenge Cup victory over Keighley Cougars, despite playing for an hour down to 12 men.

2021 saw Dean demonstrate his versatility as he made 10 of his Thunder appearances, with his last coming at fullback against Toulouse.

Making his debut away to Bradford whilst on loan from Castleford Tigers, Gill gave Thunder fans a glimpse of what was to come as he scored the first of 49 tries at Odsal.

Joining on a season long loan from the Tigers in 2019, Gill became a key figure for Simon Finnigan as Thunder enjoyed their strongest season in a decade.

Breaking Matty Daylight’s 20-year-old record for the most tries in a season in 2019, Gill joined the club permanently ahead of the 2020 season and was a potent source of points throughout his time at the club, with his 14 in 2021 again putting him top of the charts.

Academy product Gowing was one of a number of players to make their first team debut against West Wales Raiders at the end of 2018, scoring a try in the record 98-8 win.

Remaining part of the team in 2019, he earned further opportunities in both Betfred League 1 and the 1895 Cup.

Set to press on in 2021, a season ending leg break in the pre-season friendly against Whitehaven prevented the former baseballer from making further appearances for the club.

Joining the Thunder academy after first playing the game at Whitburn Comprehensive, Hudson made his first team debut in 2018 against Hemel Stags,

He made a further appearance at the start of the curtailed 2020 season in the Challenge Cup win against Siddal ARLFC before playing three more games for the club in the latter half of 2021.

His final involvement came in the away win against Oldham in September.

Cumbrian McAvoy calls time on his Thunder career after four seasons at Kingston Park Stadium, originally joining from Workington Town ahead of the 2017 League 1 season.

A powerful prop forward, “Beans” has been a consistent performer for the club

Taking a break in 2020 to visit Australia, the pandemic limited his opportunities to find a club down under and he returned to the Thunder ranks for the club’s return to the Betfred Championship.

Making 13 appearances this term, the likeable Cumbrian is set to unveil a switch back to his home county for the 2022 season.

Joining as a graduate of Warrington Wolves academy, Oakley arrived at Newcastle as the club began recruiting for a first season back in the game’s second tier.

Making his club debut away to Swinton in the Challenge Cup, Oakley was on the score-sheet against Sheffield Eagles as Thunder secured their first Championship win since 2009.

Providing competition for places in the middles, Oakley was also part of the side that took a dogged away win against York City Knights.

Joining from Castleford Tigers, Turner performed for Thunder across the backline as he featured at wing, centre and fullback in 11 games.

A spectacular solo try away against Dewsbury Rams was one of the highlights of the season from the 24-year-old, as he danced his way through the opposition defence before sprinting clear for a 80m solo effort.

Wigan Warriors academy graduate Tyrer made his first foray into senior rugby with Thunder this season and announced himself in style in his first competitive start.

Scoring a diving try in the Betfred Challenge Cup loss at Swinton Lions, he followed that up with appearances against London Broncos, Featherstone Rovers and Toulouse Olympique.

He also featured on loan with Rochdale Hornets as he gained further competitive game time with the League 1 side.

Former Widnes Vikings back row Wilde was one of a number of players recruited after Ottawa Aces deferred their participation in Betfred League 1 and proved a dependable operator for Thunder.

Starting off with a try in each of his first three appearances, Wilde’s year with Thunder was interrupted by injuries preventing him from making a consistent run of appearances.

After enrolling in the Police during lockdown, his commitments to that programme have seen him switch back to the Vikings for the 2022 season.

Former NRL centre Matty Wright joined Thunder midway through the 2019 campaign as the club looked to push for promotion.

The 30-year-old Samoan international proved prolific as he scored 50 points in seven games and was a key retention for the club’s 2020 plans.

Remaining on Tyneside for the return the Betfred Championship, Wright was a regular feature in the midfield adding a further 15 appearances to his tally.

Joining after impressing with Team Northumbria in the BUCS rugby league competition Young started his Thunder career in the halves, before making the fullback position his own from 2017.

Quick breaks and an elusive running style saw him score regularly whilst plying his trade in Betfred League 1, a competition he was named Young Player of the Year of in 2017.

Ending his time at the club just four games shy of a century of appearances, Young spent the latter stages of the 2021 season on loan with Hunslet RLFC